Soma's seafood that is particular about freshness . Offering "cooking required" rather than "cooking" 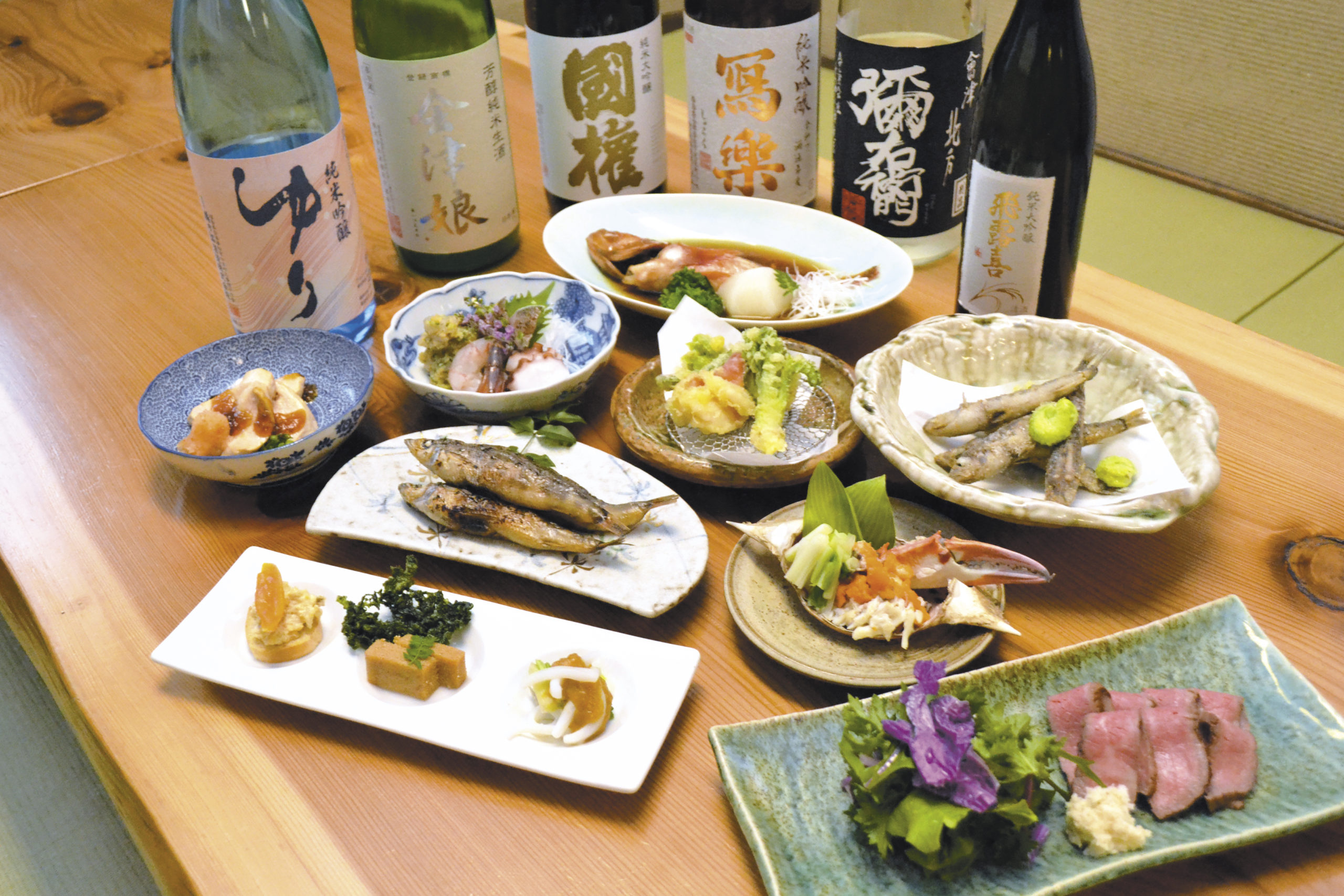 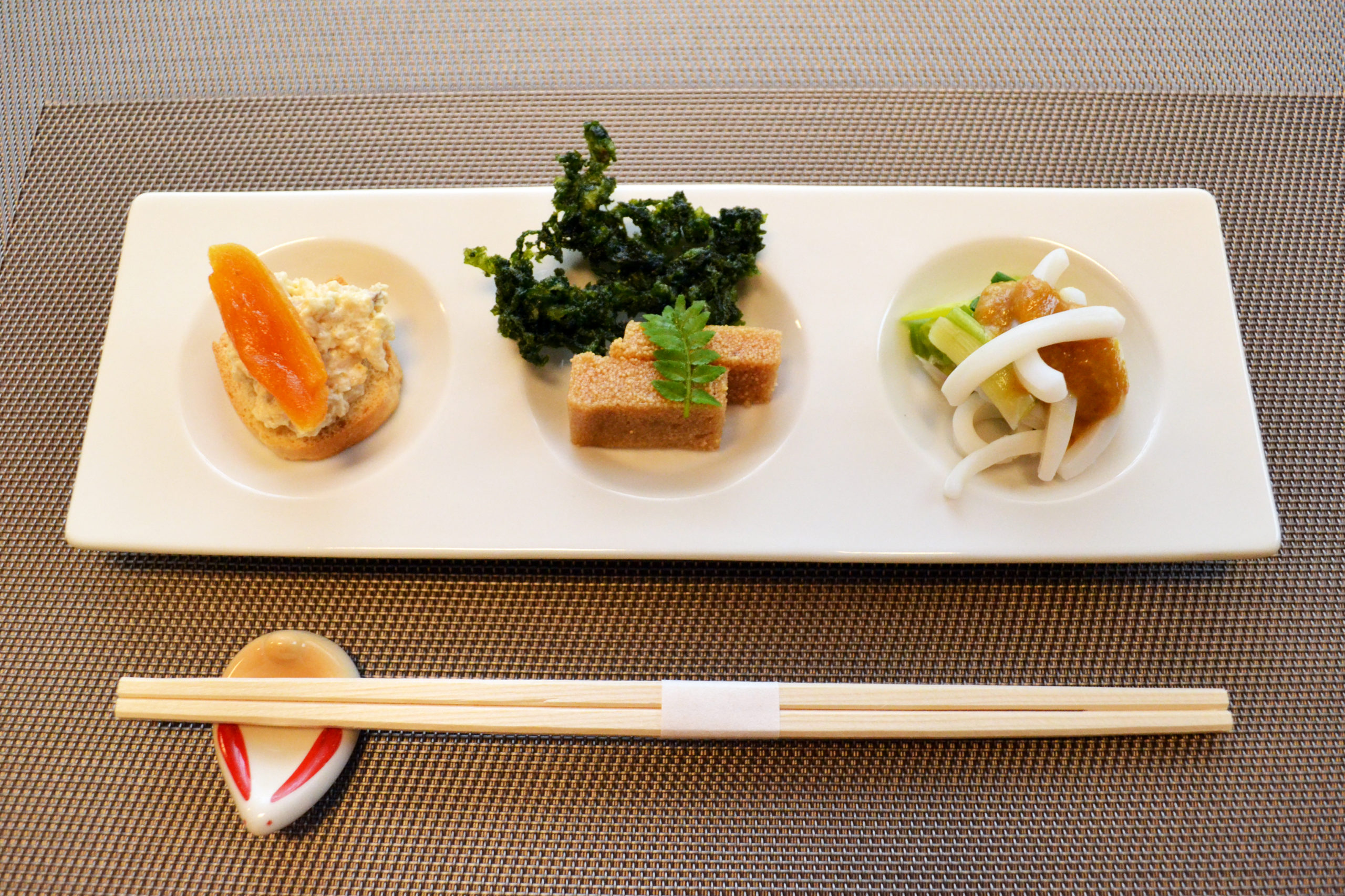 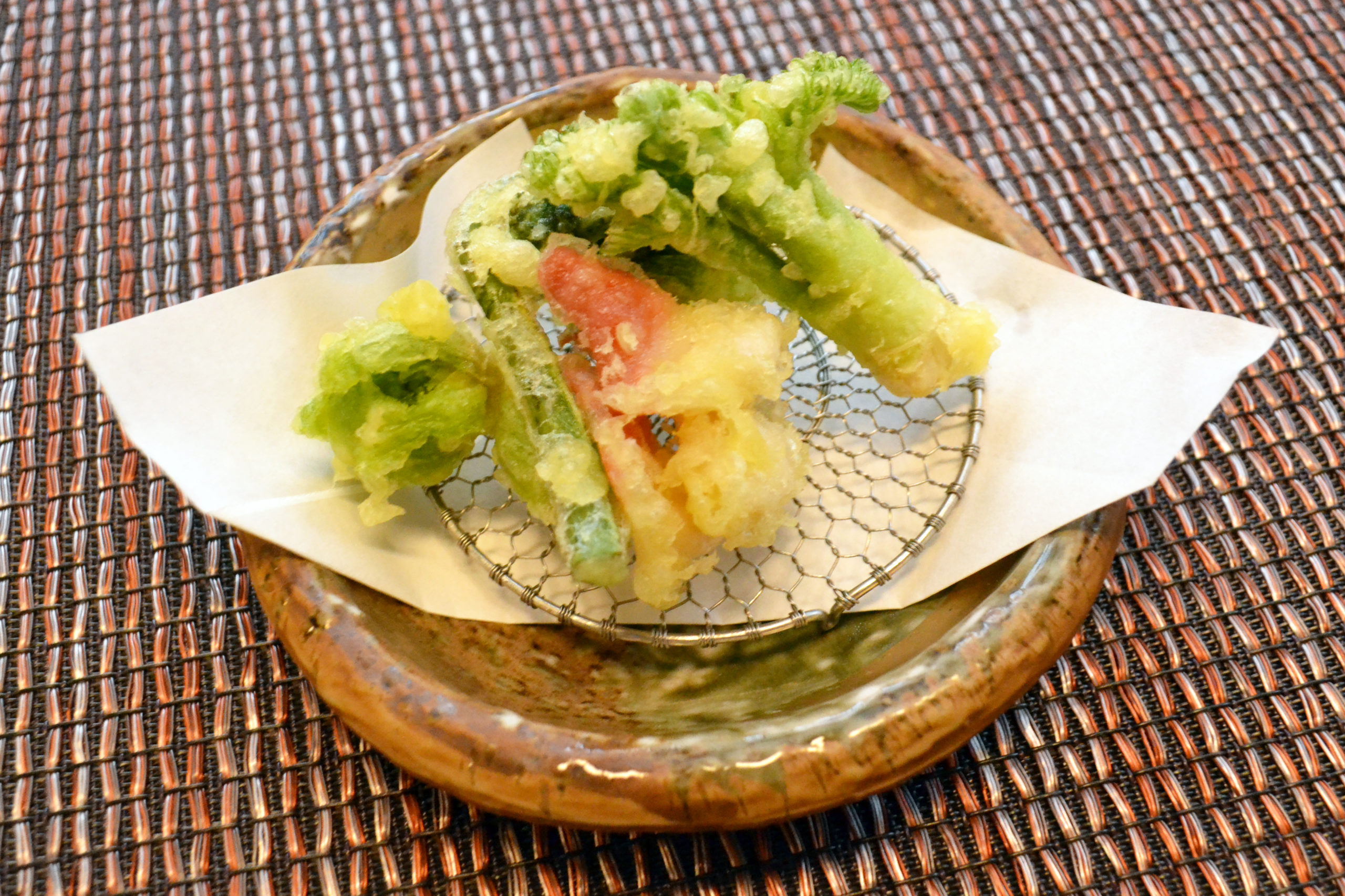 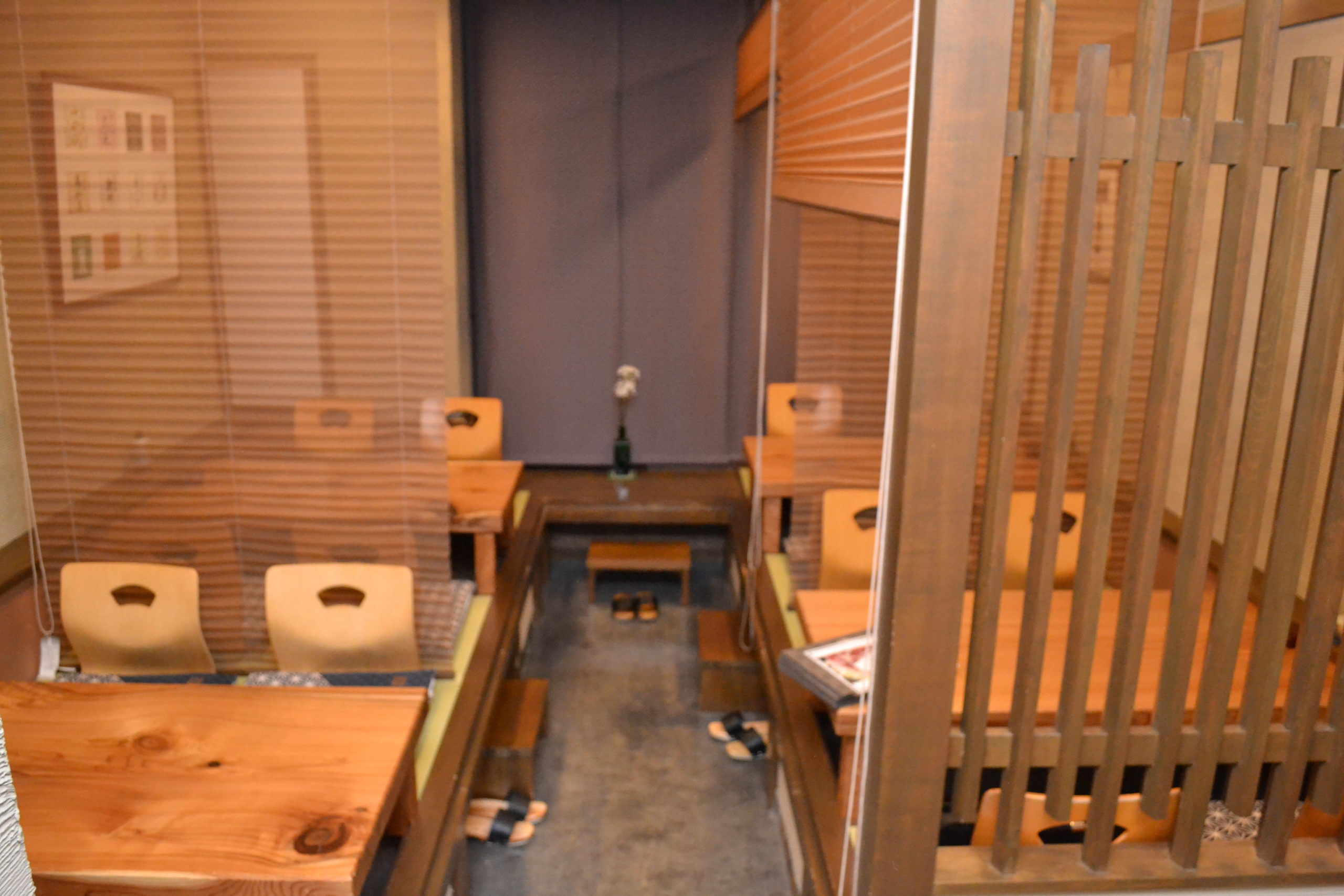 The interior of the store has a calm atmosphere with jazz. From the protrusion, it is almost colored with ingredients from Fukushima Prefecture.

The sea off Fukushima, where the cold Oyashio current (Kishima current) and the warm Kuroshio current (Japan current) meet, is called the "Shiome sea". It is a fishing ground. The fish caught in this sea is called "Jobanmono", and Soma Port in the north of Hamadori, Fukushima Prefecture has developed as one of the landing ports.

Harimaya in Fukushima City is particular about the fresh fish of Soma. It is a long-established store that will soon celebrate its 50th anniversary. It used to be open as a udon izakaya until midnight, and was known as the "store" of the town's army guards. However, in the era of the times, we are gradually searching for new stores. In 2002, we moved to the current location and re-opened it as "Saketsu Harimaya", which offers higher quality Japanese food while preserving the udon menu that is the root of the store. Currently, my daughter Oyai Yayoi, who is the daughter of our predecessor, is in charge of cooking, and her husband, Toshiaki, is in charge of the hall.

After studying Japanese food at a cook school in Koriyama, Yayoi got a job at a hotel. While working as a cooking chef under a French chef, I learned about French cuisine menus and procedures up close.

On the other hand, her husband Toshiaki was working as a hotel man at that place. It was natural that the roles of Toshiaki, who has a lot of experience in serving customers such as bartenders, and the kitchen, were shared. Jazz flows quietly inside the store, and a smart serve by Mr. Toshiaki who is the best in his tie softly adds dignity to the adult's taste time.

Born to parents who are busy managing the shop, Yayoi was taken as a child every year during his summer vacation and was entrusted to his uncle in Soma and spent the summer vacation filled with the blessings of the sea. From that experience, the commitment to freshness of fish is more than that of other people. I have purchased fish from various places, such as Kyushu's nervously tightened fish, but the one I arrived at was Soma's fish, which is the closest sea from Fukushima City and has a lot of feelings. 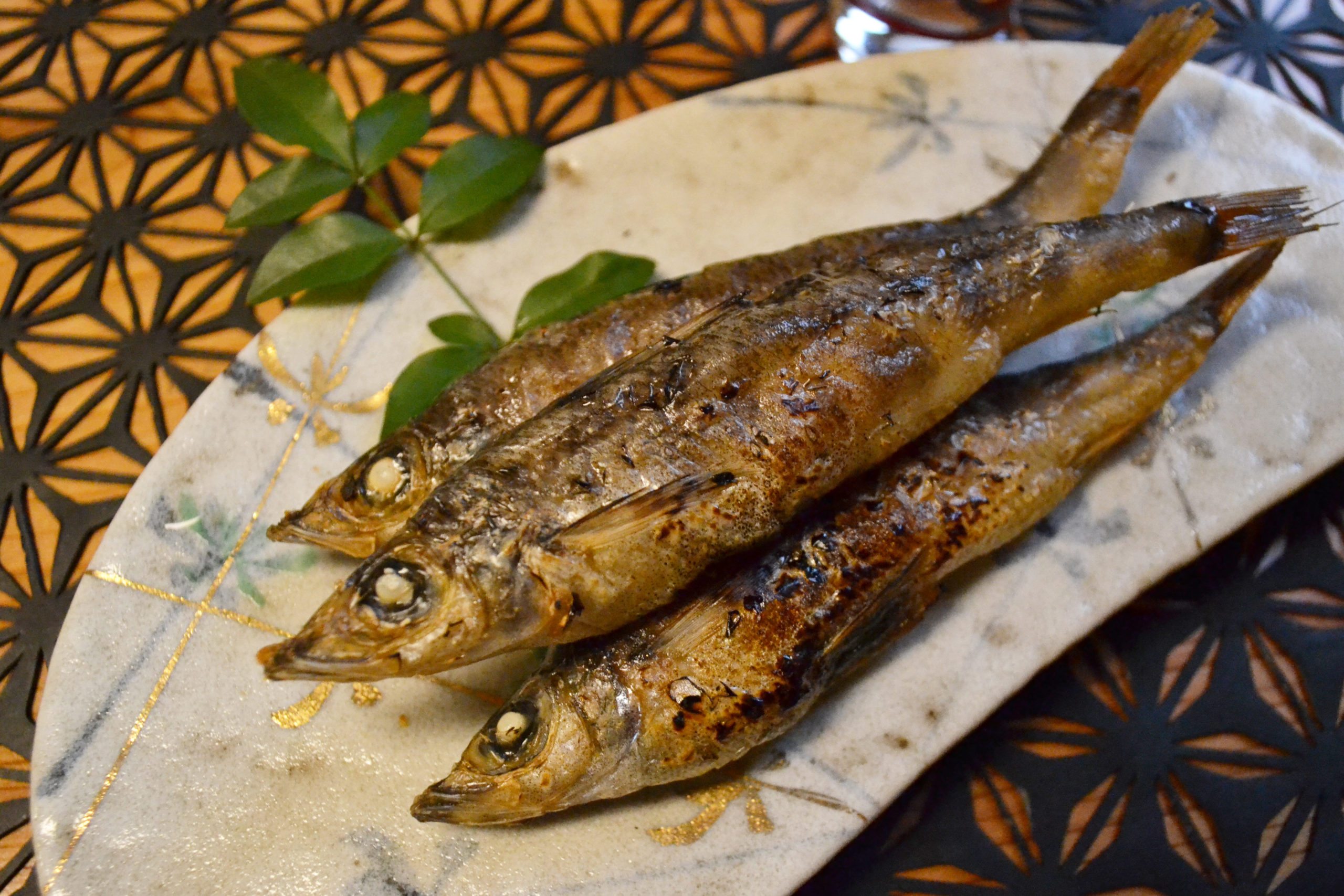 Large Mexicali landed in Soma. Bake thoroughly in the oven.

Mexicali is one of the most indispensable Soma fish. It is widely known as a specialty fish of Iwaki, but high quality Mexicali is landed in Soma. At Harimaya, we offer large-sized Mexicali that is as big as sardines once dried and carefully baked in the oven, and general-sized Mexicali is fried chicken, which is a classic fried chicken, and offers different cooking methods depending on size. .

“Because the locals often use it to entertain customers from the Tokyo metropolitan area, we have responded to the wishes of those customers to“ eat local foods ”. It's a calm menu. I'm sorry that I chose us as a place to entertain our customers, but I am sorry for serving dishes that can be eaten anywhere in the country. "(Mrs. Yayoi)

If you notice, most of the fish, vegetables and meat are from Fukushima. The former udon izakaya is now one of the best known restaurants in Fukushima city where you can taste the locals and has become a shop that attracts many customers from outside the prefecture. 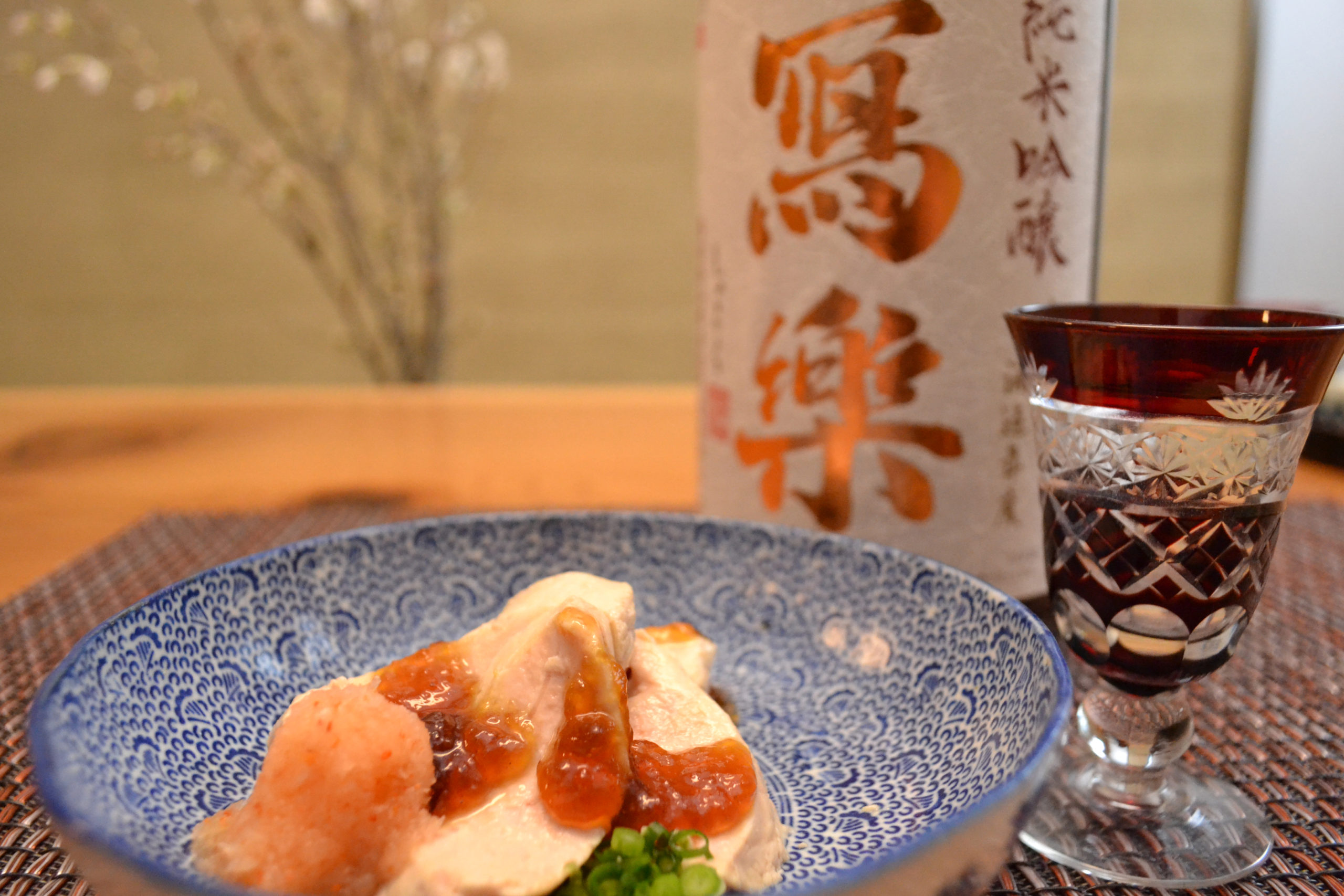 Anma liver from Soma with a rich and melting taste. A crystal of the commitment to freshness and the technique learned under the French chef.

Among the seafood from Soma, Mrs. Yayoi is particularly confident in recommending Ankan when the winter season comes. Incorporating the vacuum cooking method used for foie gras, the liver sent directly after landing is vacuum packed in the store. Heat the mixture at a low temperature of 67-70 ° C for 35 minutes to trap the fat, then cool it down. This technique was learned by Mr. Yayoi under the French chef during the hotel era. It is a superb dish that is full of freshness that can only be delivered directly from the production area and that melts quickly in your mouth.

The liquor to be combined is "Syaraku Junmai Ginjo" from Miyaizumi Meijo, Aizuwakamatsu City. The umami unique to Furayaku, who has fans all over the country, firmly receives and drains the fat of the bean jam.

"Nodoguro" is known as another name for Akamutsu, but in Soma, "Nodoguro" is "Yumekasago". This is another popular fish that represents Tokiwamono. This boiled throat is boiled. The liquor to be combined is "Kokuritsu Junmai Daiginjo" from Minamiaizu Town Kokuritsu Sake Brewery. It is a powerful sake that firmly accepts the boiled sweetness of the broth.

Sake's choice is Tomei's domain. There is also an idea that is unique to Harimaya, which is particular about freshness.

"Although we always have 8 to 9 types of prefecture-produced sake, we basically only handle those that show the face of the brewery. Some stores may have more prefecture-produced sake, but I haven't forcibly increased the number of freshnesses that I can manage properly, but I want to put them in, but I don't want to reduce the quality without drinking too much. I don't. "(Mr. Toshiaki)

Yayoi says that while he has a passion for Soma, his mother is from Aizu and he was familiar with the local cuisine of Aizu such as herring sansho-zuke and Kozuyu from childhood. Fukushima's "taste DNA", which has a variety of food cultures from the sea to the mountains, is infused into the dish.

"We only have straight dishes that we don't do much. It may not be urban, but since there is no small workmanship, there are many dishes where you can taste the ingredients as they are.
< br> As a chef, you don't have the feeling of waving your arms like "eat me". Rather, it is just the opposite, and I always think about how to fit the customer and how to please the customer. To that end, we don't use anything that isn't fresh and doesn't use anything that isn't in season. That is the only commitment. "(Mr. Yayoi)

So I don't have a philosophy about cooking. So Yayoi is humble. However, this is the philosophy of Harimaya, which is the feelings of the couple, "for customers". We will continue to build a store for two people to polish the season's sake, the season's taste, and the roots of the store, udon.